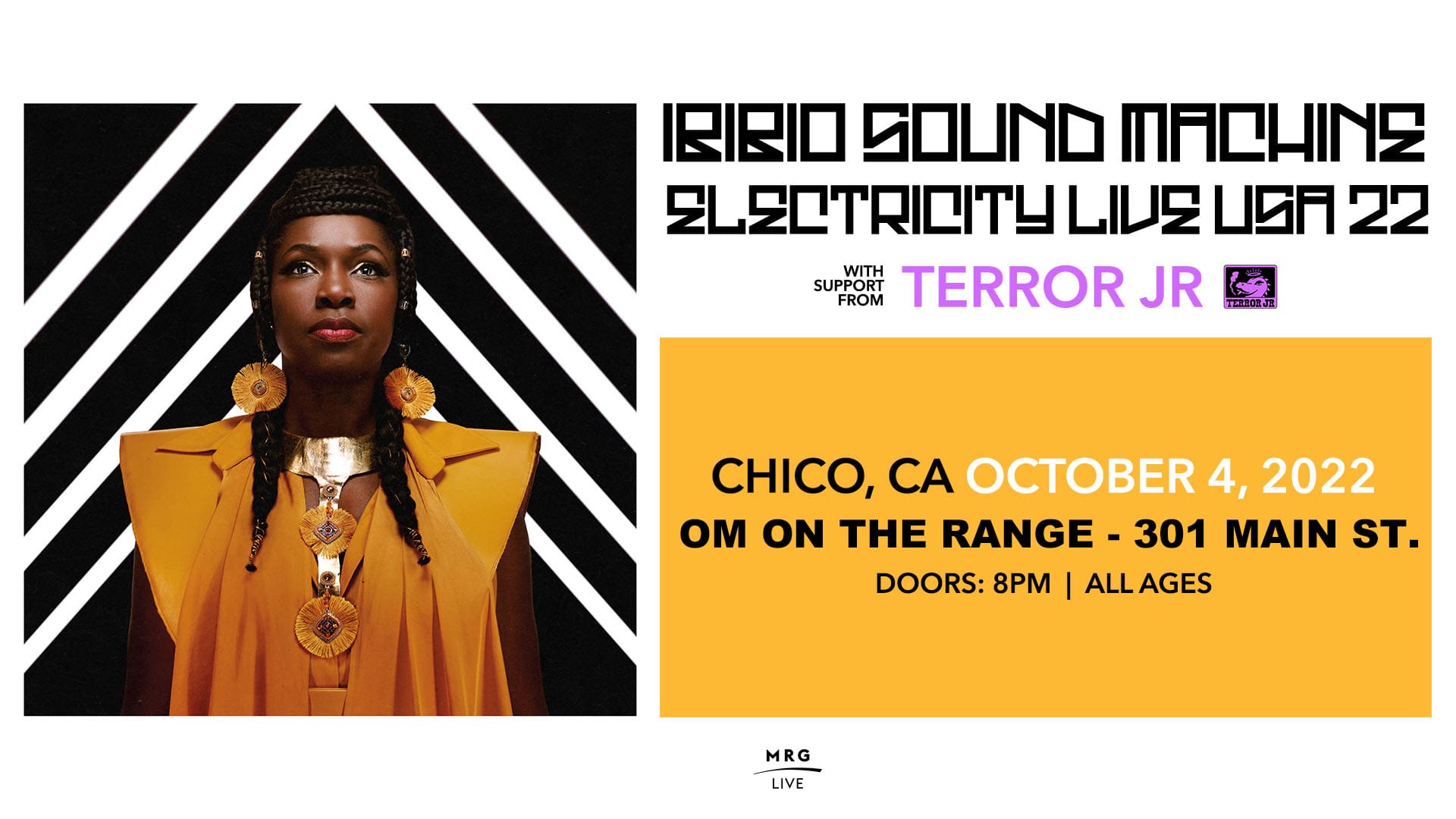 ***VENUE CHANGE*** Ibibio Sound Machine will now be performing at OM ON THE RANGE located at 301 Main St. in Downtown Chico on Tuesday, Oct. 4. Tickets for the new venue are available to purchase online HERE or you can purchase at the door starting at 8PM at OM ON THE RANGE.

Even in trying times, “there is no love without electricity.” Electricity is the fourth and most progressive album from Ibibio Sound Machine, and like all good Afrofuturist stories, it begins with an existential crisis. “It’s darker than anything we’ve done previously,” says Eno Williams, the group’s singer. “That’s because it grew out of the turbulence of the past year. It inhabits an edgier world.”

Electricity was produced by the Grammy Award– and Mercury Prize–nominated British synthpop group Hot Chip, a collaboration born out of mutual admiration watching each other on festival stages, as well as a shared love of Francis Bebey and Giorgio Moroder. The fruits of their labor reveal a gleaming, supercharged, Afrofuturist blinder. Electricity is the first album Ibibio Sound Machine have made with external producers since the group’s formation in London in 2013 by Williams and saxophonist Max Grunhard. True, 2017’s Uyai featured mixdown guests including Dan Leavers, aka Danalogue, the keyboard jedi in future-jazz trio The Comet Is Coming, but Hot Chip and Ibibio Sound Machine worked together more deeply throughout the process, collaborating fully. Along the way, the team conjured a kaleidoscope of delights that include resonances of Jonzun Crew, Grace Jones, William Onyeabor, Tom Tom Club, Kae Tempest, Keith LeBlanc, The J.B.’s, Jon Hassell’s “Fourth World,” and Bootsy Collins.

The hook of opener “Protection From Evil” has Williams wielding a massive synth line from Hot Chip’s Al Doyle like a spiritual shield against unspecified, malign forces—unspecified because Williams is speaking in tongues. Her lyrics are onomatopoeic: their meaning is defined in her energetic delivery. As Electricity takes off, so do Williams’ words towards a brighter future, alternating between English and Ibibio, sometimes within verses, and propelled by Joseph Amoako’s unabating afrobeat. She digs into this sentiment further on single “All That You Want,” coolly assuring her romantic interest while also requesting reciprocity. Meanwhile, Scott Baylis’ playful Juno synth guides the listener’s feet along the dancefloor.

Electricity is a deep and seamless realization of Williams’ and Grunhard’s ambitious founding manifesto to combine the singularly rhythmic character of the Ibibio language—which Williams spoke growing up in Nigeria—with a range of traditional West African music and more modern electronic sounds. While the band enjoys veering further into electronic territory with the help of mutuals like Hot Chip, Grunhard emphasizes, “For us, it’s not just a matter of embracing new technology. What’s key is to keep the music grounded in African roots.” Ibibio Sound Machine best exemplify this on Electricity’s “Freedom.” That track was inspired by the water-drumming rhythms of Cameroon’s Baka women, which in turn fueled its lyrics, which in turn prompted Hot Chip and Ibibio Sound Machine to layer joyfully kinetic electronic counterparts on top in the studio. As the track culminates with the mantra of “rage, hope, cope, soul,” it’s clear that Ibibio Sound Machine have channeled, harnessed, and distilled these words as guiding principles, both for the album and for the turbulent world that awaits it.

If your event is cancelled, we will refund the amount you paid for your tickets (minus order processing, service and delivery fees) using the same payment method used for purchase. If your event is postponed, we will contact you with the new date and time. All Event personnel have the right to refuse entry to any ticket holder for any reason at their discretion. Venue and Talent are subject to change without notice and are not grounds for a refund. Anything promised by the promoter that is unfulfilled is not guaranteed by the seller and is not grounds for a refund.

There are no refunds.